Animikii at Natives in Tech Conference 2020 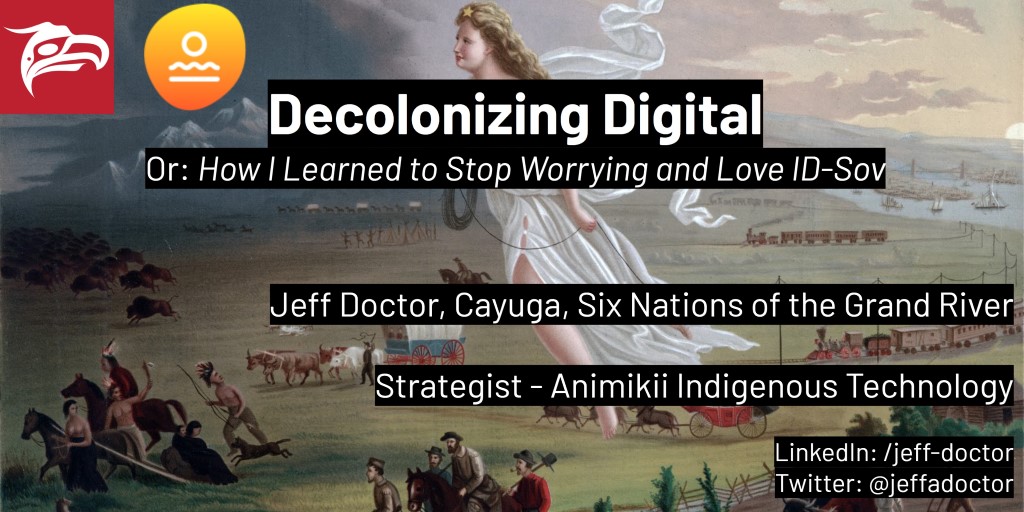 On November 21st, 2020, Jeff Doctor presented at the Natives in Tech Conf 2020 - a virtual gathering of Native and non-Native technologists: educators, artists, hackers, and all-round rad human beings who are working to empower and support Native communities around the world.

Jeff was there to discuss the basics of Indigenous Data Sovereignty (ID-Sov), why it’s important, how he stumbled into it, and how Animikii supports ID-Sov via our software called Niiwin.

We caught up with Jeff on his return to see how  Natives in Tech Conf 2020 went, what his takeaways were, and what he found to be the most impactful part of the event.

Why did you choose this opportunity?

I’m a big fan of Natives in Tech. I also hang out with them on their Slack workspace. They are a small but mighty community of Native technologists from all over the world, who build tech tools that benefit their communities. There’s obvious alignment between their efforts and Animikii’s, so I support them where I can.

How did you contribute?

I did a presentation on Indigenous Data Sovereignty (ID-Sov). The material was largely based on our Decolonizing Digital series along with some other personal research. I wanted to address the practical issues around Indigenous Data Sovereignty and how difficult it is to actually implement ID-Sov—especially when we can’t even easily verify—or agree on—who is or isn’t “Indigenous.” These concepts can be contentious and complicated, and warrant further investigation in all our communities. So, I focussed on some Indigenous identity basics that we can all relate to regardless of what colonized country we come from.

My goal was to nudge people to do their own exploring/research. I hoped people would check out the international Indigenous Data Sovereignty networks and the more academic aspects of ID-Sov. I also hoped to inspire people to investigate their own identities a bit so they can better figure out how to assert their own rights to their data.

What part of this opportunity did you find the most impactful?

It was inspiring to be there alongside other Indigenous people who use tech in so many different ways, to hear them speak to where they come from and how they are trying to build things to support their respective communities.

The feedback I’ve received so far is similar to what I usually get when I talk about ID-Sov: “I didn’t know that”. Whether it’s something really specific about the nuances of the Indian Act or more sweeping like the CARE Principles for Indigenous Data Governance, I often forget about all the work I had to do to learn about these things myself. I’m lucky that I get paid to do this kind of research, that’s a luxury not everyone can afford so I try to share what I know without being overbearing or paternalistic. It can be a tricky and humbling balancing act because there’s always more to learn.

Knowledge and wisdom are priceless. If anything they are sacred, and we have a responsibility to share the knowledge and wisdom we acquire through the work we do. This doesn’t mean spewing out facts or random tidbits of information. Sharing knowledge and wisdom means speaking to a larger strategy, one where we empower our communities with an understanding of the systemic aspects of colonialism.

You can’t “fight” what you can’t “see,” and empowerment goes beyond “education” (which can be so easily co-opted). Sharing knowledge and wisdom must include providing the tools and critical insights that people and communities need to make their own decisions.

Part of my job at Animikii is what we call Indigenous tech ecosystem development. Indigenous people aren’t new to tech; we’ve always been technologists. But we’ve had to fight hard to claim space in largely white-cis-hetero-male tech organizations. Assimilation is real. It’s ongoing. And, it’s incredibly difficult to both maintain our identities in these overtly hostile spaces while also exploring what it means to be Indigenous in the first place.

For Animikii to grow and create more opportunities for social change, we need to create stronger networks and positive pathways for others to follow.

This includes participating in smaller, scrappier events like this one instead of only attending “mainstream” places that may do little more than tokenize us so they can boost their “diversity stats.” It also means doing a lot of work “behind the scenes” that can never be promoted publicly.

Animikii doesn’t have a “saviour” mentality. We recognise our responsibility to our communities. This goes beyond simple notions of “giving back.” It speaks to a complicated relationship of reciprocity that is central to many—perhaps all—Indigenous world views.

While I’m tempted to lean on Truth, I’d say Honesty and Courage. I tried frankly discussing the harmful impacts of colonialism in a deeply personal way and how they filter into all aspects of Indigenous lives. That’s a scary thing to do in public. I spent a lot of time thinking about what I was going to say, and how I was going to say it, and in a way that didn’t reveal too much about myself while still saying enough to challenge the myths created by Canada and perpetuated by Canadians, wittingly or not.

It’s one thing to have these discussions in a private conversation. It’s another to have my thoughts recorded for all time in a YouTube video. The moment I hit that send button I lost control of that aspect of my voice, that moment in time. My perspectives and knowledge will inevitably change, but that recording is permanent and can be picked apart, criticised through so many avenues, and perhaps even used against me someday.

I suppose this is what is meant by “learning in public,” putting yourself out there for criticism and having a thick enough skin to take whatever comes. There’s a certain privilege that comes from being able to do that. It’s a luxury that many people—especially Black and Indigenous women—cannot afford when so many aspects of the “modern” world are built to harm them.

I have my own personal challenges and speaking out in public comes with a set of risks for me and my family, but I also have a lot of responsibility to do so as a person who can pass for being “white,” and definitely as a “man” in a white supremacist, patriarchal state. There’s a balance between hogging the mic and taking the heat—and, I hope that my work ultimately sides with the latter.

I have always been a very private person, especially when it comes to data, and even more so when it comes to my Haudenosaunee identity. The presentation I did represents a sort of “leap of faith” that I really don’t want to do but at this point feels necessary. I don’t like considering myself an “expert.” I feel like more of a temporary hub that just passes a bunch of knowledge from one point to another, but I do know a lot of things that need to be talked about publicly. This presentation and other recent opportunities I’ve had  are just the start of this journey to “learn in public.” I guess I just have to wait and see what comes of it while doing my best to listen to and learn from all the feedback— “good” or “bad”. Nya:węh.