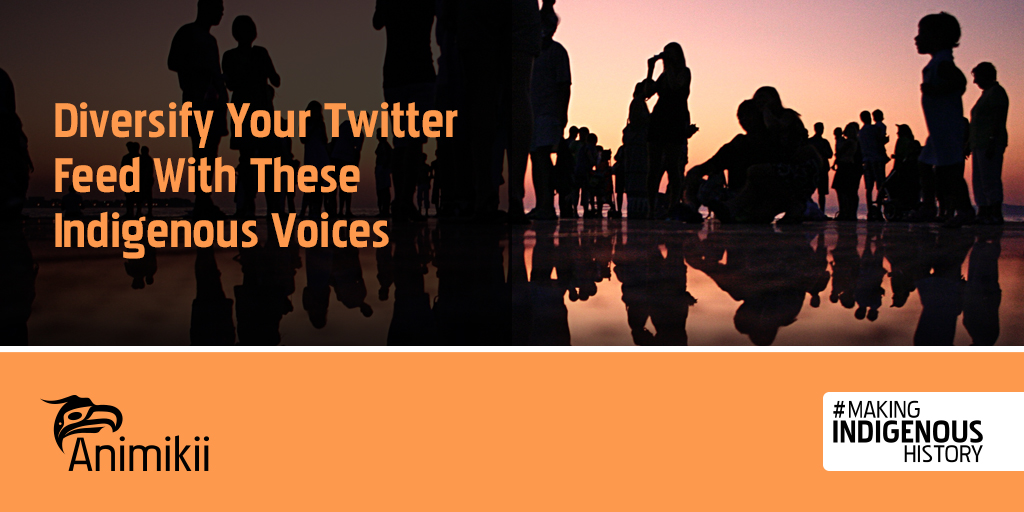 Using Twitter is a great way to get informed on issues that affect not only Canadians but people around the world. It is the go-to site for updates on live events and a great platform for intelligent - and some not-so-intelligent - debates. However, like many social media platforms, sometimes the people you follow represent only a small perspective on a larger issue.

That’s where diversifying your feed comes in. When you follow people on Twitter who you generally wouldn’t follow - or simply did not know about - it provides a different perspective and often offers new insight into an issue.

To help you diversify your feed, we have compiled a list of must-follow Twitter accounts. These accounts by no means represent a comprehensive perspective but are a good starting point for unique perspectives on larger issues.

If you think we’ve missed anybody, please let us know at info@animikii.com or tweet us @animikii.

Apihtawikosisân, the Cree name for the Métis which means “half-son”, is the name of Chelsea Vowel’s Twitter feed, a Métis author from manitow-sâkahikan (Lac Ste. Anne) in Alberta. If you're looking to follow the perfect balance of information, with a bit of mom humor and a healthy dose of activism and snark, Vowel’s your lady.

Alethea Arnaquq Baril is from Iqaluit, Nunavut and is passionate about Inuit seal hunting, documentary film making, and Inuit traditional tattoos. Some of her projects include Angry Inuk, Arctic Defenders, and Experimental Eskimos, all documentary films about Inuit peoples and their culture, traditions, and history.

As a writer, illustrator, TV producer, activist, and speaker, Jay Odjick’s twitter feed is the perfect combination of art, Indigenous news, and updates on his projects. One such project is Odjick’s graphic novel Kagagi: The Raven, a superhero comic adapted into an animated TV series on APTN which is based on an Anishinabe story about a trickster.

If you have not heard self-proclaimed “noise provider” aka throat singer Tanya Tagaq perform, your life is incomplete. To compensate for the growing hole in your soul, you should probably follow her on Twitter for some hard-nosed truth-telling and some incredibly palatable banter. Also, you should probably see her live. Like, now.

From the Samson Cree Nation in Maskwacis, AB, Jack Saddleback identifies as a Cree Two-Spirit Transgender Gay man and is heavily involved in mental health activism and advocates for issues on gender and sexual diversity, Two-Spirited issues, and HIV/AIDs.

“Ojibwe dude” Jesse Wente will keep you updated on Indigenous news, but he will also make you think, laugh, cry, and most significantly, retweet. He’s also Head of Toronto International Film Festival Cinematheque, which is kind of a big deal. He’s also a columnist for Metro Morning and Unreserved, as well as an on-point public speaker.