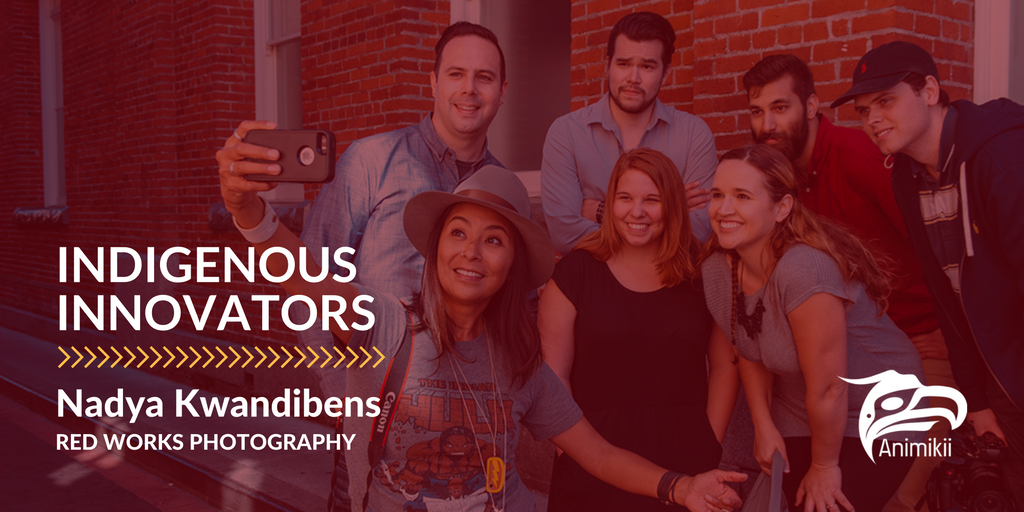 This article is a part of Animikii’s Indigenous Innovators series in which we profile Indigenous leaders, activists, artists and entrepreneurs to better understand the challenges and opportunities Indigenous Peoples face in Canada today.

In her life as a professional photographer, Nadya Kwandibens has been a steady eye behind the lens for the past decade. Nadya is an Ojibwe (Anishinaabe) photographer originally from northern Ontario, but in her career, she’s worked in places all over Canada ranging from small Indigenous communities to sprawling, urban centres. Since launching her business, Red Works, Nadya has used her influence and her work to amplify the voices and stories of Indigenous Peoples across Canada and the United States. 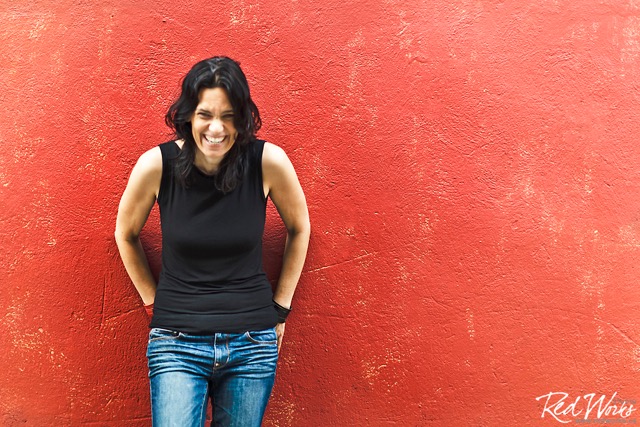 In 2008, Red Works was initially called “GatheRed Works” but it was soon shortened for simplicity. It was important for “red” to be in the name of her company because of the symbolism attached the colour; red represents Indigenous Peoples on the medicine wheel and it was essential for Nadya to include some mention of Indigenous Peoples in her organization’s name to express her professional goals. Red Works began “out of the need [to see] more positive, empowering images of our [Indigenous] People than what mainstream media shows.” It was always her goal to use Red Works to fulfill that need and to work with Indigenous Peoples as much as possible.

Since founding Red Works in 2008, Nadya has toured around Canada for about 9 months out of the year, only returning home to her community Animakee Wa Zhing First Nation (formerly Northwest Angle #37) in northwestern Ontario for the remaining 3 months. Throughout her many years of experience as a photographer, Nadya has remained “an artist through-and-through” thanks to her clear vision for Red Works.

This vision is embodied in her Artist/Vision Statement:

“We, as Indigenous people, are often portrayed in history books as Nations once great; in museums as Nations frozen stoic; in the media as Nations forever troubled. These images can be despairing; however, my goal seeks to steer the positive course. If our history is a shadow, let this moment serve as light. We are musicians, lawyers, doctors, mothers and sons. We are activists, scholars, dreamers, fathers and daughters. Let us claim ourselves now and see that we are, and will always be great, thriving, balanced civilizations capable of carrying ourselves into that bright new day.”

Whenever Nadya feels that the struggle of travelling and being away from home for months at a time is wearing her down, she comes back to this statement as a way of reminding herself of her goals and why they’re important. To Nadya, ‘success’ means finding ways of inspiring Indigenous people “to be proud of who they are, of where they come from, [and] of where they find themselves.” For Red Works, success is about inspiring “goodness and greatness in others.”

One of the ways that Nadya inspires Indigenous Peoples is by engaging our youth in photography workshops. She sees photography as a way for youth to learn more about themselves and to find a voice through art. While working with youth, she’s always amazed by the diverse perspectives that she finds in their photos. Nadya sees photography as a door that “opens up so much of the world” for artists. While she recognizes that being a photographer, or any kind of artist can be a “tough career path,” she still encourages youth to explore photography seriously and advises up-and-coming artists to commit themselves to their craft for as long as they love what they’re doing. Nadya believes that it’s paramount for young artists to “just keep exploring and learning more about [themselves].” She says that photography has taught her so much about herself, like what her limits are, what her passions are and what’s fueling her hard work. She has found photography to be a rewarding career path and always encourages young artists “to just go for it” and to take chances when they can.

“What’s paramount is to just keep exploring and learning more about yourself.” 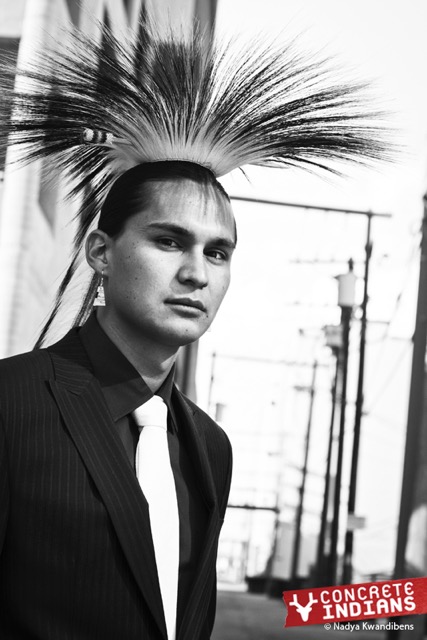 While she excels at portraiture and stylized photos, some of Nadya’s favourite shots are those depicting very personal, raw moments for her subjects. She feels that she can get her best shots when her subjects allow her in or when they “share a lot of their life stories with [her].” For example, one of her most acclaimed photo series, Concrete Indians, is all about capturing her subjects’ personal identities and authentic selves. Nadya created Concrete Indians to explore the concepts of “identity and decolonization within an urban setting.” She launched the series, back in 2008 by issuing an open call to friends and family who might want to be a part of the series. At the time, Nadya had been living in Toronto and felt the need to explore identity and decolonization in a way that was modern and authentic. In that open call, she talked about the process that many Indigenous people have of “coming into their own, reconnecting with their culture, strengthening who they are within their cultures but also within the crazy, chaotic urban, cities that we live in and find ourselves in.” She also realized the critical need to represent  Indigenous Peoples as complex, contemporary, individuals living in the modern world rather than in a historical sense. Within five minutes of sending out this initial call to action, she received responses asking to participate in the project; that’s when she realized she had hit upon something profound and universal among Indigenous people. 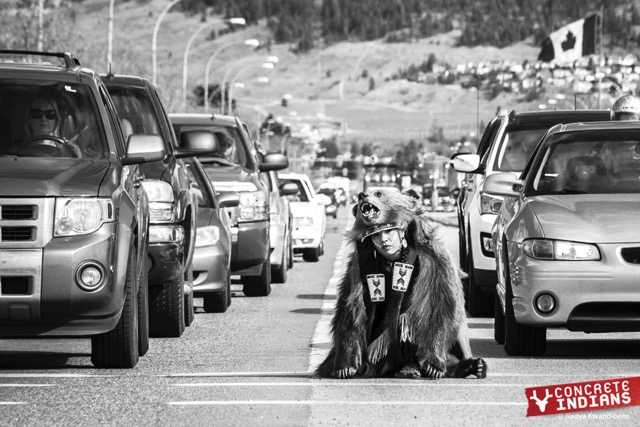 Throughout the series, Concrete Indians, Nadya gives up full creative direction to her subjects; she periodically
sends out open calls for the series asking for participants to develop their own portraiture concept with her and has received remarkable responses to these open calls. As Nadya shoots photos for this series, she’s allowed into the lives of her participants. Concrete Indians portraits often depict Indigenous people in regalia or traditional clothing, juxtaposed with an urban context. The photos are always presented in black and white, which Nadya notes were a conscious decision to underscore the contrast between modernity and history. The activism inherent in this artwork harkens back to Nadya’s Artist/Vision Statement and shows her commitment to exploring Indigenous identity through a contemporary rather than a strictly historical lens. Beyond Concrete Indians, Nadya also loves to capture the shared, personal moments between performer and audience. Some of Nadya’s favourite days at work are those during which she gets to take photos of live performances - especially concerts and music shows. Some of her favourite shots come from moments when her subjects laugh or break character and are authentic. 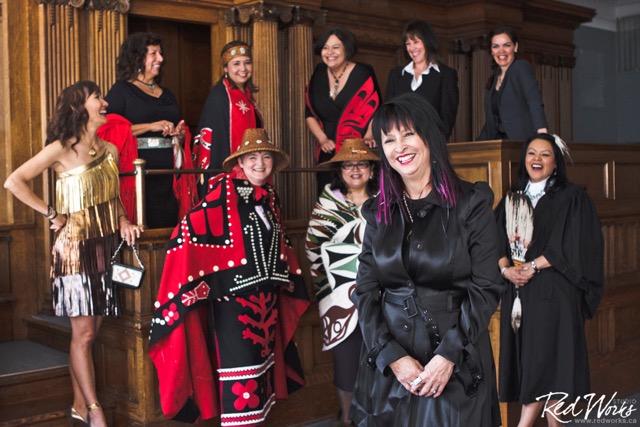 Nadya continues to work on Concrete Indians when the opportunities come to her but she has also recently launched a new series called emergence, which is all about recollecting and placing emphasis on Indigenous intelligence. As with Concrete Indians, Nadya collects images for emergence based on an open-call platform. She describes the series as focusing “on the existing presence of Indigenous intelligence within our nations. It’s about looking inward and facing ourselves. It’s about empowering and lifting each other up.”

Since launching her business, Nadya has allowed herself to be open to the many professional and artistic opportunities that have come to her through her work; this openness and a willingness to work flexibly with clients has resulted in a unique and storied career. Although she’s going to be taking a temporary hiatus from touring for Red Works in 2017, Nadya will continue to work on Concrete Indians and emergence and she’ll still travel for the right opportunities. Nadya is committed to her art and believes that she “will continue to be a photographer for as long as [she] can hold up a lens. As long as [she] can keep shooting. As long as [she is] able to do it.”

Animikii was grateful to spend a morning this September working with Nadya on photos of our growing team here on beautiful Coast Salish Territory in Victoria. Visit http://www.redworks.ca/ to learn more about Nadya and Red Works or to inquire about booking workshops or photography sessions.