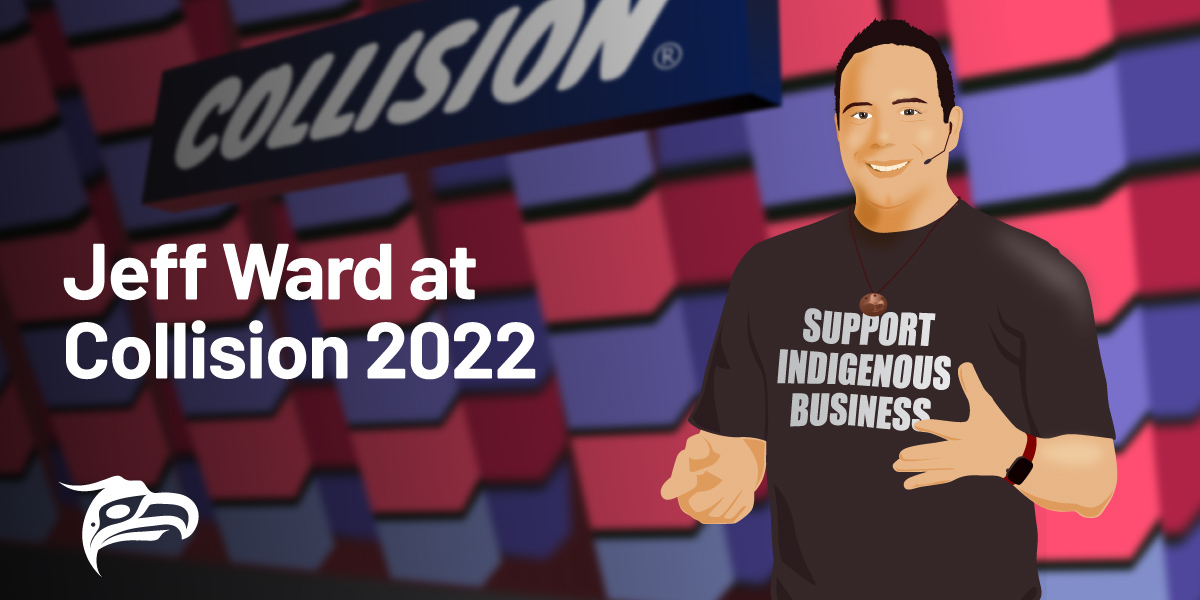 The Collision Conference is one of the largest tech events in the world, so Animikii was proud to send CEO Jeff Ward to present as a part of the “Truth and reconciliation: the path ahead” topic on June 21st, Indigenous Peoples Day.

“When I started the company in 2003, there weren’t a lot of Indigenous people in tech that I knew about,” Jeff stated when interviewed before his presentation.

“A lot of my career over the last 20 years has been trying to inspire other Indigenous people to get into tech – to share with the world that Indigenous people have always been technologists, inventors, and scientists.”

As a B Corporation, we are transparent about what it means to create significant and positive change to address social injustice. This information is available in our recently released 2021 Social Impact report.

Indigenous technology is much tougher to define. We have written about our approach to Indigenous tech before, but this idea is constantly in flux.

At a high level, succeeding in this space means supporting like-minded Indigenous-owned technology organizations and businesses.

We see progress in this space every day. Many Indigenous-owned tech companies are succeeding in Canada and the United States  (including several that attended Collision).

Māori technologists in New Zealand are using AI to revitalize their native language, and Indigenous groups in the Amazon are sharing techniques for protecting their rainforest home with GPS tracking and drones.

This momentum in the tech space isn’t a surprise when you consider the innovative power of Indigenous Peoples around the world, something Jeff Ward spoke about in a Ted Talk.

We share these stories and others in our News River newsletter every Wednesday (you can sign up here).

At a deeper level, Indigenous technology must respect the networked relationships of humans and non-humans that allow us to use technology daily.

Tech alone cannot be a solution to society’s biggest issues, so we guide our decisions with these implications in mind.

Here’s what made Collision 2022 an important gathering for Indigenous technologists and leaders.

At least 9 Indigenous startups were in attendance at the conference. Organizers launched the Indigenous Attendee Program to allow for a culturally safe space for attendees from Inuit, Métis, and First Nations communities.

“If you are a founder and you want to hire Indigenous people in technology, you have to do the personal work first to make sure that will be a safe space for that person and to reduce the harm footprint within the organization,” Jennings said about representation in the industry.

Sheila North, a journalist and former Manitoba Keewatinowi Okimakanak Grand Chief, also joined the panel. You can watch their complete discussion below.

You can watch their complete discussion below.

These acts of meaningful representation show steps towards Call to Action #92 of the Truth and Reconciliation Final Report, which calls on the corporate sector to allow equitable access to jobs, training, and educational opportunities for Indigenous Peoples.

Jeff Ward also sat down with Sheila North for a separate panel to discuss the importance of another aspect of Call to Action #92, reviewing hiring practices for inclusivity and including benefits like extended bereavement care or allowing employees to choose their statutory holidays – both policies that Animikii prides itself on.

Here’s the video of this panel discussion.

We look forward to growing the ecosystem of Indigenous Peoples in technology in the years ahead, especially with in-person events like the Collision conference.