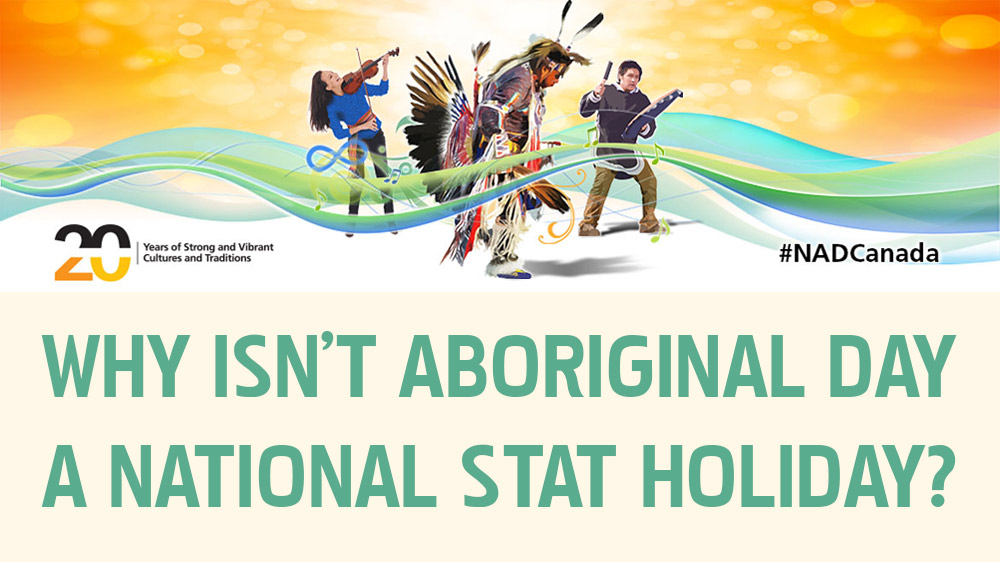 National Aboriginal Day is just around the corner – June 21st – and to celebrate it, communities across the country will host events where all Canadians can join together to share, explore and revel in the diverse cultures and contributions of First Nations, Inuit and Métis peoples of Canada. Unfortunately, many Canadians won’t be able to take part in this fun and incredibly important events, because they’ll be stuck at work.

National Aboriginal Day turns 20 years old this summer; in 1996, the Governor General of Canada PROCLAIMED June 21st to be National Aboriginal Day. Despite this, the day wasn’t celebrated anywhere in Canada as an official statutory holiday until 2001, when the Northwest Territories became the first of any province or territory to recognize National Aboriginal Day as a formal stat. In December of 2015, the Yukon followed its neighbour’s lead and indicated that it too will consider making this day an official stat holiday. Yukon and Northwest Territories have sparked the conversation, now it’s time for the rest of Canada to take note of the voices calling for change and to follow the two territories’ actions to officially recognize this important day.

National Day for Truth and Reconciliation

In 2015, the Truth and Reconciliation Commission of Canada (TRC) stated:

“Reconciliation is not an Aboriginal problem; it is a Canadian one. Virtually all aspects of Canadian society may need to be reconsidered.”  — Summary of the Final Report of the TRC

With its findings, the TRC shone a spotlight on the urgent need to properly – and nationally – address Indigenous-settler relations in Canada. The TRC drew more eyes than ever before to the issue of true reconciliation; as we navigate the aftermath of the commission’s Final Report, we, on an individual, provincial/territorial and national level, must decide what the “post-TRC Canada” will be like. Will we choose to take up the TRC’s 94 Calls to Action? Will we choose to truly recognize the past and improve our country’s future?

Among the TRC’s 94 Calls to Action, is the call to create a new, national, statutory holiday: the National Day for Truth and Reconciliation.

“We call upon the federal government, in collaboration with Aboriginal peoples, to establish, as a statutory holiday, a National Day for Truth and Reconciliation to honour Survivors, their families, and communities, and ensure that public commemoration of the history and legacy of residential schools remains a vital component of the reconciliation process.” — TRC Call to Action #80

We at Animikii hope to see a positive response from the Federal Government on this issue; through their own actions, the Northwest Territories, the TRC and the Yukon have all essentially called for the Government’s response. Are they listening?

A Call to Employers

"Provide education for management and staff on the history of Aboriginal peoples, including the history and legacy of Residential Schools, the United Nations Declaration on the Rights of Indigenous Peoples, Treaties and Aboriginal rights, Indigenous law, and Aboriginal-Crown relations. This will require skills based training in intercultural competency, conflict resolution, human rights, and anti-racism". — TRC Call to Action #92 iii

By recognizing National Aboriginal Day as a stat holiday, businesses acknowledge this Call to Action. By supporting – or even participating in – community events on June 21st, business owners and employees can show their respect for Indigenous culture in Canada. For those who have never had, or have never taken the opportunity to learn about Canadian Indigenous culture, a nationally recognized, the statutory holiday might just be the encouragement needed to get them out of the house, and into our Communities. A national holiday, means national respect, action, and understanding – it’s as simple as that. And to us, as Indigenous Peoples, we can’t overstate how important national respect, action and understanding can be.

Therefore, I call on all employers in Canada to move faster than the Canadian government and to acknowledge June 21st, National Aboriginal Day, as a formal stat holiday. Take initiative and give your employees the opportunity to get into their communities to celebrate Indigenous peoples, to learn about their histories, and to explore the celebrations that will unfold whether or not they're sitting at their desks. National Aboriginal Day doesn’t need to be a national stat holiday to be special, but to make it a national stat holiday, would be pretty special to us.

PS. While we’re on the subject, I think “National Indigenous Day” has a pretty good ring to it. Just Saying.

"We owe it to each other to build a Canada based on our shared future"
— Murray Sinclair, Chair of the TRC